An incident occurred on Saturday 12th October involving Manchester Storm #10 Dallas Ehrhardt, during the game between the Coventry Blaze and Manchester Storm, which is deemed an abuse of an official. The incident was reviewed by the EIHL's Department of Player Safety which determined supplementary discipline is required under EIHL Casebook - RULE 116 (v.) – ABUSE OF OFFICIALS.

As play is proceeding towards the defending zone of the Manchester Storm, with the opposing team in possession of the puck, #10 Dallas Ehrhardt hooked a player, for which the Referee immediately signaled a delayed penalty. Considering the hooking call is conclusive that a penalty is required, play should have been stopped with a Storm player simply touching or playing the puck. Instead Ehrhardt, knowing that he is receiving a penalty, winds up and takes a fairly forceful shot in the direction of the Referee. The area and direction in which Ehrhardt shot the puck is not considered normal. It is considered a gesture of displeasure with a hooking penalty call that was obvious, or in frustration at himself for allowing an attacking player ahead of him and needing to use an illegal means to attempt to stop him.

Either way, it is not the fault of the official, or permissible to assume the official was at fault. At no time is a player permitted to use or show physicality towards a game official; or in this case, to shoot a puck at, or in the near vicinity of, a game official.

The EIHL has a comprehensive abuse of an official ruling, within the EIHL Casebook. In this case, it is considered a threatening gesture ruled under Abuse of an Official Category 1, which carries a suspension range between 1-3 games. After considering the game officials' report and video evidence, it has been determined that supplementary discipline is required. 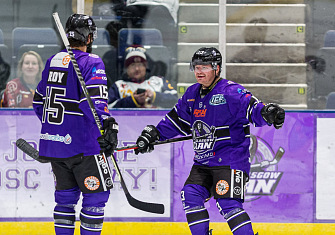