Belfast Giants ensured that they remain in the hunt to defend their league title with an impressive road win in Guildford.

A high-scoring affair in Surrey saw Belfast leave with the win for the second time in three attempts this season. Curtis Hamilton's backhanded effort in the slot gave the visitors the lead at 7:15, and Liam Morgan following up on Liam Reddox's breakaway attempt doubled the lead less than two minutes later. TJ Foster got the Flames back into things at 10:35 with the period’s final goal.

Lewis Hook scoring at 31:43 re-established the Giants’ two-goal advantage before Elgin Pearce struck 2:27 into period three to give Belfast some breathing room. A late empty-net goal from David Goodwin with 1:21 to play rounded off the win for Belfast who are only three points off the top with a game in hand. 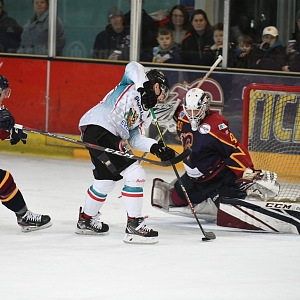