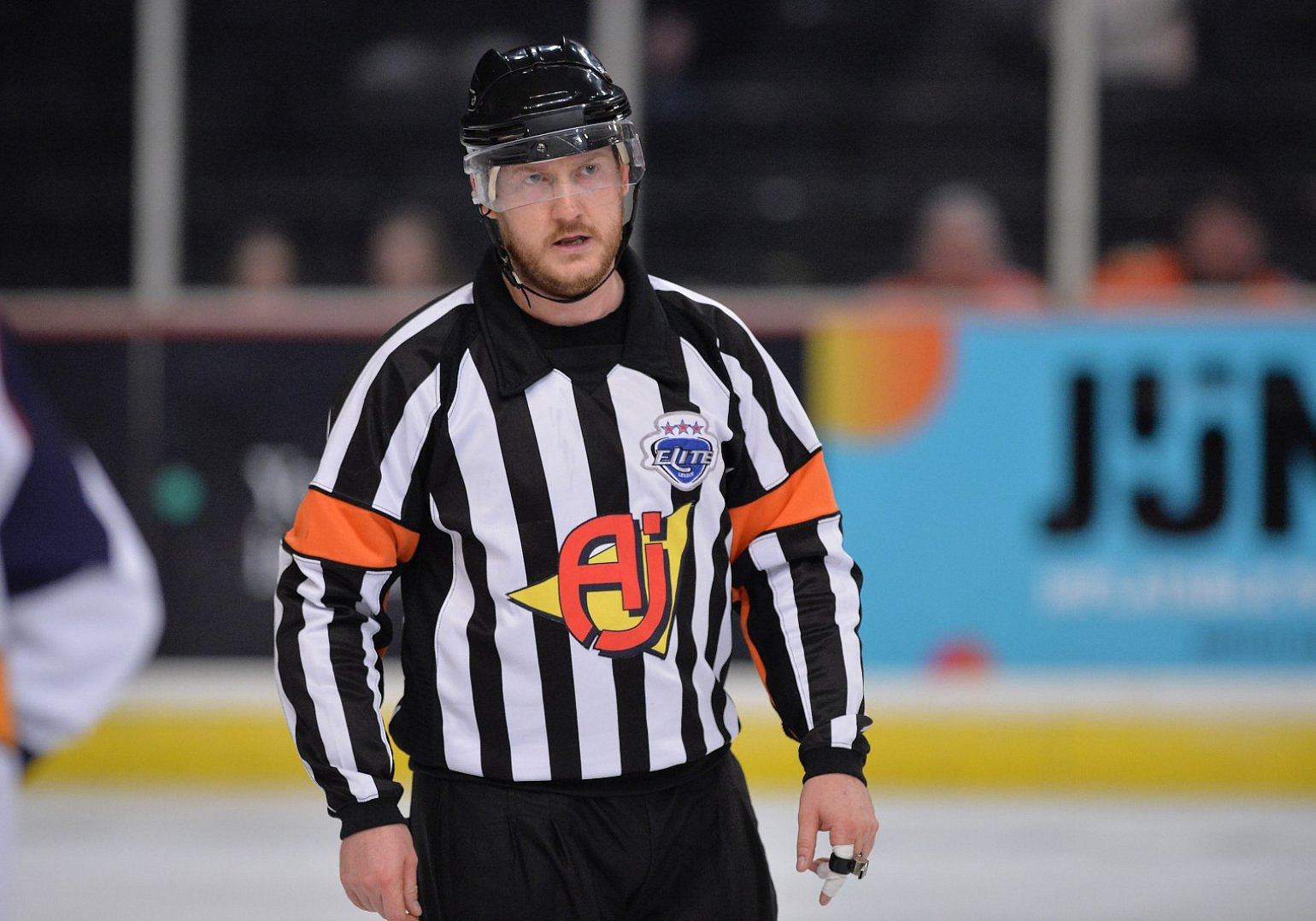 After 22 seasons, Elite League referee Tom Darnell is hanging up his whistle. Tonight's Nottingham vs. Sheffield game was his last in the Elite League.

"I’ve been officiating now for a long time, I’m in my 22nd season, and that takes a lot out of you in terms of travelling and weekends. You're away every week for eights months a year working pretty much every weekend. I’ve got something really interesting going on away from hockey with my career and that needs focus," explained Darnell. "Where league has gone now and how it's improved, you need to have full focus to good a good job as an official and I don’t feel like I can commit time to it. I’ve had a good run, 22 seasons and 20 in the top league from the Superleague and now the Elite League, so it feels like the right time to pass it on to younger guys."

Tom started officiating when he was playing hockey as a junior. "I refereed kids when I was playing and really wasn’t good enough to play at the top level. I wanted to stay in the sport but had no interesting in being a bit-part player in the lower league, so decided to give this a go! I got an opportunity handed to me when some officials didn’t turn up to a game and I was roped in to officiate," he recalled. "The following season I got called up by the Superleague to their training camp as an 18-year old which was great. It’s always been something that I enjoyed, I've loved doing the games, worked hard at it great and had great mentors to learn from."

The moment his decision was made to officiate fully does stick out, however: "I was playing in Milton Keynes and iced for two games in the old EPL for the Kings. I remember being on a bus to Blackburn and getting one shift in a game - so a four- seconds of game time was not what I wanted to do with my hockey career!"

Being an official can be a thankless task, and there are no prizes on offer in the traditional way. "As an official, you never win a trophy, but you look to be assigned to big games - games between top teams, that’s what you work hard for and I feel like I’ve achieved that. I’ve been lucky enough to officiate eight playoff finals (three as a linesman, two as a referee) and done 11 World Championships. So it’s not a trophy but as an official you get you ‘wins’ elsewhere, it’s satisfying to tick off things like this and feel proud of them," said Darnell. "It probably sounds weird to fans why someone chooses to officiate, you do need certain mindset where you can let criticism wash over you - or channel it, use it to be better and to focus for next game."

Players and coaches have commented on the growth of the Elite League over recent seasons, but what about the referees. "I think the league has definitely moved on, we feel it as officials, and it’s now a European-North American hybrid which I think it a good style of hockey for people to watch and promote," he explained. "Officiating will always be criticised, but the sport needs to maintain the same level of development in officiating as it does with players, that’s something ice hockey has to take seriously."

Darnell continued: "Something I will be vocal about is that we can’t kill officials with criticism or else we won’t have many left. It’s a high profile job and it should be done professionally, but the EIHL product needs officials and that includes having the process to support, develop and nurture officials to have a good on-ice product. There are systems in place with work from Mike Hicks and Greg Kimmerly to enable this to happen better."

Over his 22 year career, do any moments stick out? "Mike Hicks, Lee Young and Andy Dalton, the three of us sort of developed together, and we were fortunate to call a playoff final together a few years ago and that definitely sticks out," he recalled. "I was also fortunate enough to test myself in Denmark for a few years, which was a great experience and a totally different style to the EIHL. It was very special to do games there. It was always an honour to be called up for international games and represent the country. Being selected for Division 1A when most of the other officials were working in the NHL or KHL was something I was very proud of. Certainly, the UK bats above it’s weight in terms of officiating at international level and it’s something we should be proud of, too."