The Dundee Stats exited COVID-19 protocol for the second time on Thursday night, but on this occasion had a win to celebrate their first game back.

Their game against Manchester was played in front of 200 fans due to Scottish Government COVID-19 restrictions.

In what was a lengthy opening period, the home side went aheadiniside the opening five minutes of the game after the Storm turned the puck over in their own zone, and Charlie Combs reacted quickest to a loose puck in the crease after Gabriel Desjardins' shot was saved at 4:53.

The teams traded two powerplay opportunities each through the remainder of the period but no goals saw it end 1-0, although the Storm did have a goal chalked off after a video review showed that the puck had entered under the side of the net.

Storm, who have just one away win all season, equalised 6:49 into period two when Tayler Thompson's shot was blocked with a crowd of players in front of the net, and Tyson Fawcett was on hand to fire home the rebound.

Dundee went back ahead 1:53 before the end of the period on a 3-on-2 rush, and despite Jason Bacashihua making the initial save Connor Sills followed up on the rebound.

Manchester had three straight powerplays to try and tie the game inside the final 12 minutes of the third period but to no avail. With Bacashihua pulled for the extra skater, Linden Springer saw shots from the blueline blocked three times by Timi Lahtinen before the puck broke kindly for the Finn to clear the puck, and Dillon Lawrence tapped into the empty cage with 14 seconds to go.

Sebastian Bengtsson added some gloss to the final scoreline when he converted off Sills' feed with three seconds remaining. 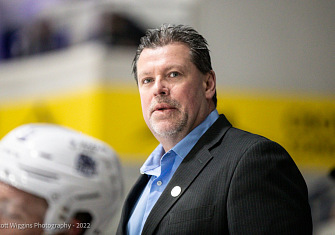